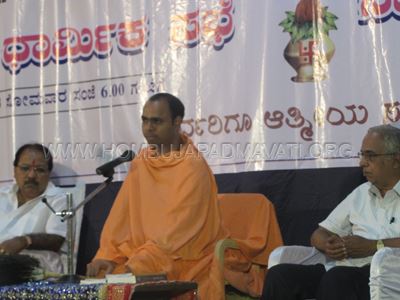 Hombuja (Hosanagara Taluk, Shimoga District, Karnataka), April 1, 2013: His Holiness Swasti Sri Devendrakeerthi Bhattarakha Swamiji the pontiff of Sri Hombuja Jain Math invited the devotees to actively participate & involve themselves in the forthcoming Panchakalyana scheduled to be held at Hombuja from 10-16 May, 2013. He mentioned this in his religous discourse in the religious gathering organised on the occasion of annual Rathayatra at Hombuja. He said that the rennovation of Guddada Basadi on the hillock and conducting the panchakalyana of Lord Parshwanath, Lord Shanthinath & Lord Bahubali in the Trikuta Jinalaya is of foremost important as it is a part of his sankalpa (vow) made during his pattabhisheka and was also aspired by the past Bhattarakhas.
Further he said that the youths are future of Jainism and felt that it is imperative to motivate the youths to actively involve in the activities of the religion. He also called upon the youth to actively involve themselves in Jainism related research. Further, he felt that the guidance of senior noted Jain scholars like Sri M.A.Jayanchandra is very much necessary for youths to move ahead in this direction. He also recalled how the guidance of Sri Jayachandra helped him decide his subject for his post doctoral research.
Inaugurating the website of Sri Kshstra Hombuja – WWW.HOMBUJAPADMAVATI.ORG on the occasion he appreciated the efforts of Nitin H.P. in developing Hombuja’s website & his interest in popularising the history & heritage of Jainism and Hombuja. – Sri Kshetra Hombuja