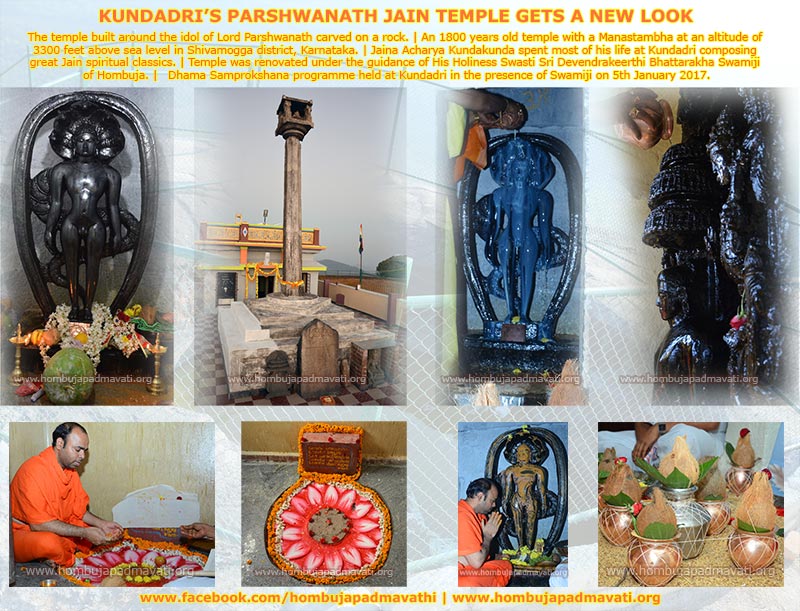 Kundadri (Shivamogga District, Karnataka), January 5, 2017: The ancient Sri Parshwanath Digambar Jain temple located on the sacred Kundadri hillock has been renovated recently. The temple has got a new look post renovation carried on by the Hombuja Jain Mutt under the guidance of His Holiness Jagadguru Swasti Sri Dr. Deevendrakeerthi Bhattarakha Swamiji.

Dhama Samprokshana Programme – The Dhama Samprokshana (a series of rituals being performed for sanctifying the temple post renovation) programme was held at Kundadri in the presence of His Holiness Swamiji on 5th January 2017. Speaking on the occasion Sri Deevendrakeerthiji said, “utmost care has been taken so that the originality & antiquity of the of the temple is not compromised during the renovation process. Further, compound wall has been constructed around the temple to ensure its safety and safety of the devotees visiting the place”. “A meshed enclosure has also been built around the pond to ensure that it is not polluted through unwanted wastes thrown by devotees & tourists visiting the place” he added.

A small mantap kind of enclosure with seating arrangement for around 25 people has also been constructed near the temple for visitors to have a glimpse of the scenic beauty around the temple.

It can be recalled here that by virtue of being located at a higher altitude and lesser human movement this place had turned out as a hub of many anti-social activities. Thanks to the efforts and personal interest taken by His Holiness Deevendrakeerthi Swamiji, Kundadri is getting back on track to its glorious past over the past five years.

About Kundadri & Parshwanath Temple – Kundadri is an ancient Jain Heritage Centre located in the Shivamogga district of Karnataka at an altitude of 3300 feet above sea level and is one of the highest peaks in the state. It is known after the Jaina Acharya Kundakunda who spent most of his life here composing great Jain spiritual classics. The Parshwanath temple at Kundadri is built around an ancient idol Lord Parshwanath carved on a rock. A manastambha with a Chaturmukha idol can be found in front of the temple. Behind the temple the pada (feet impression) of Acharya Kundakunda has been engraved on a rock and a room has been built around this. In addition to its religious importance Kundadri is also a favorite destination for trekkers and nature lovers. An annual fair is held every year at Kundadri on the Makara Sankranti day. – Sri Kshetra Hombuja